In a business busting move to suck a few more dollars out of City residents, Los Angeles has imposed massive increases on parking meters Citywide - some as much as $4 an hour - and increased the hours in the day the meters run.

While merchants from Highland Park to Chatsworth are up in arms, nowhere is anger greater than in the fledging NoHo Arts District.  Theatre owners are aghast that formerly free nighttime parking is no longer available and are finding impratical for patrons to step out of a production to feed the meter.  An aide to Councilman Tom LaBonge has told NoHo theatre owners their office is "looking into it" but local business owners hold out little hope for relief.
Posted by Michael Higby at 7:04 PM No comments:

HAPPY NEW YEAR TO ALL IN NOHO

Posted by Louis (Video Louis) Elovitz at 4:03 PM No comments:

AGAIN I ASK... What is The Monolith in NoHo ? 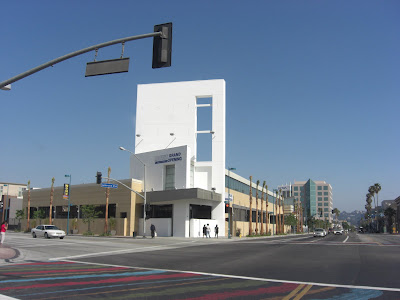 We have this "Monolith" at the corner of
Chandler & Lankershim across from the
Redline Station, and before you say
anything I know it is the HOWE'S MKT
plus other commerce. But haven't you
wondered "Just Once" what that large
flat tall structure on the corner is
supposted to be used for ?


Is it going to say Welcome to NoHo?
Let's get some suggestions for this.
Anyway here I am in MyVid filmed
2007 raising the ?
. .

The San Fernando Valley Business Journal reports that three years behind schedule and following flip-flops between going condo and then back to rentals, the NoHo 14 Tower across from the Metro Station now has four residents.

According to the Journal an 850 square foot one bedroom unit goes for $2300 a month. Most of the neighboring new properties go for less than that. As the paper notes a similar unit at the much tonier Americana at Brand in Glendale is about the same rate.

In the meantime JSM, the developers of the Tower, have sold three other developments in NoHo and is reportedly "on-hold" with their most recent development at Vineland and McCormick.
Posted by Michael Higby at 3:13 PM No comments: