Apparently we were very wrong.

The news we are getting is that the former HOWS space in NoHo has been leased by a gym.  We had heard that Gold's Gym had previously pulled permits; the news I am hearing now is that the site will be the latest branch of 24 Hour Fitness.

Considering that no less than four membership based gyms operate within a two - three block radius of the site one wonders why the need for a grocery store was not met.

As it stands, the broker handling the sale, Eric Reuveni, made a statement that most of the residents "do not know how to cook." Thus, HOWS or any other grocery store isn't right for the area.

A Market Comes to NoHo?

Fresh on the heels of news that HOWS, the former occupant of the grocery store space at NoHo Commons, is closing all but one of the rest of it's stores and essentially going out of a business as a chain, comes very reliable information that next week the announcement will come that a new food retailer plans to open in the space.

Could it be Henry's Farmers Market?

We had heard earlier this year rumors that Henry's was coming to the location.  But Joe B. from Mayor Sam said that permits had been pulled to build a Gold's Gym there.  However today we have learned from sources that principles involved in the transaction have confirmed a market is coming and that the name will be announced next week.

Henry's, a chain with roots going back before World War II, operates 35 locations in Southern California with a retro-themed, natural foods approach similar to Whole Foods but at a lower price point.  Indeed Henry's had actually been owned by Whole Foods before it was aquired by a subsidiary of Smart and Final in  2007.

With a new market moving in and the demise of the HOWS' chain it's sweet justice for a community who was blamed for killing its best chance at an upscale type grocery store.  Looks like it wasn't our fault after all.

Let's hope they re-open the wine room, too!  Glass of pinot grigio please!
Posted by Michael Higby at 9:19 PM 4 comments:

HOWS Shutting Down All

But 1 of Remaining Stores [laist.com] 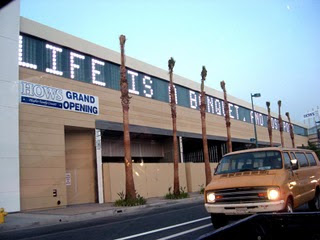 It's a tough time to be running an upscale grocery

the operators of HOWS to shut down all but one of their stores,

is selling off their stock, Torrance has been sold off,

Malibu is gearing up to shut down, and

Only the Pasadena location will remain in operation.

Posted by Louis (Video Louis) Elovitz at 2:45 PM No comments:

' we've got blisters on our fingers ' 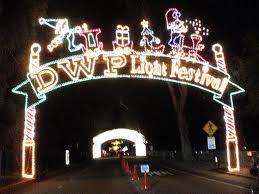 here is what you will miss ...


official info:
"Griffith Park Holiday Light Festival Takes a Year Off
For the 2010 holiday season, the Griffith Park Holiday Light Festival
will not be taking place. It is taking a holiday, as a major water
infrastructure project is under construction on Crystal Springs Drive.
We wish everyone a very happy holiday season."
Posted by Louis (Video Louis) Elovitz at 12:48 AM No comments: