In January of this year we re-enacted the Treaty of Cahuenga
which was was signed between Lieutenant Colonel John C. Frémont
and General Andrés Pico in 1847, ending hostilities in California
between Mexico and the United States. The subsequent
Treaty of Guadalupe Hidalgo of 1848, ceding California
and Texas to the United States. Here is this year's celebration. 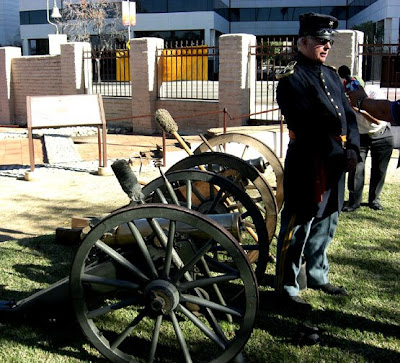 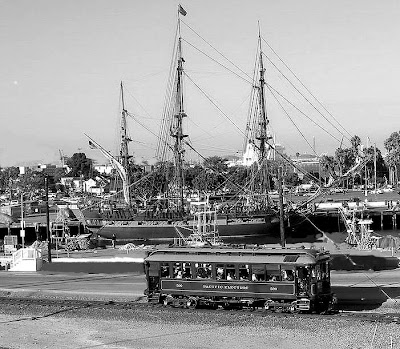 TODAY San Pedro has the Re-Creation of the Pacific Electric
Railway that blanketed Southern California from the early 1900's
until the Freeway Age of the 1950's. 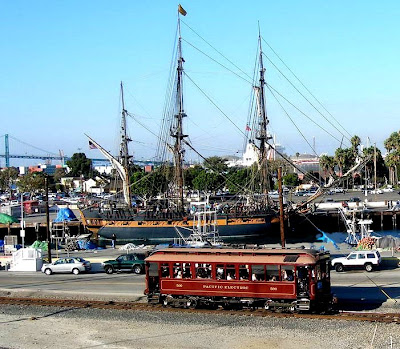 The San Pedro Waterfront Red Car runs from Port's of Call to
to the Cruise Center Fridays thru Mondays serving the tourist
community enjoying this area.

NoHo has talked about a NoHo Street Car,
WHY NOT US !
THE vintage street cars available
are up to date are handmade,
and as the one's above, and
are made here in Los Angeles.

Of course, I 'photo-enhanced' the pic to make it look like olden days,
I even took out the bridge, doing it just to show you it is not history.

The California Car seen below is historically correct
with original coloring, wood paneling and seating
just like a hundred years ago, and even better.
With this knowledge you know
that a NoHo Street Car is a viable,
and I say a necessary addition to our NoHo Arts Distict
and it is a project we should invest in for North Hollywood.

Neither of these photos is mine, that I 'fixed',
The Original Photo is by
John Smatlak,
one of the great people who made the San Pedro system.
clic2∆enlarge
.
.
;
Posted by Louis (Video Louis) Elovitz at 3:02 AM 2 comments: