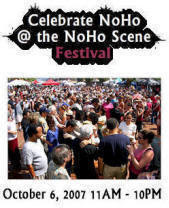 
Ton's of Events with
art, theater and music
headlining in the evening

Posted by Louis (Video Louis) Elovitz at 4:30 AM No comments: 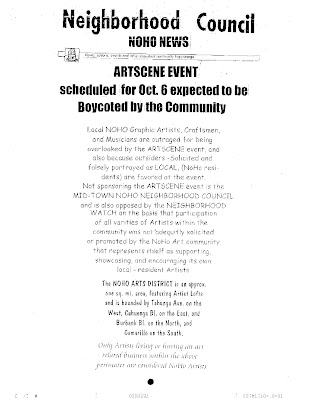 At its most recent meeting, the Midtown North Hollywood Neighborhood Council was unable to act on a last minute request for funding from organizers of the NoHo Scene festival to be held October 6th in the NoHo Arts District.

The Council's Board of Directors could not approve the requested funding due to the lack of a quorum at the meeting. Additionally members of the Board of Directors felt uncomfortable approving the funds without sufficient time to study the proposal.

In the last few days a crude hand produced flyer started appearing around town. The flyer seems to represent itself as a publication from the Council and claims that local artists and others intend to boycott the event. As well it infers that the Council and an unidentified Neighborhood Watch group do not support the event.

Mid Town North Hollywood Neighborhood Council President Cary Adams, in a letter to NoHo Scene organizers denied that the Council is not in support of the Festival. Other community leaders referred to the bogus publication as a shame and derided its anonymous author(s).
Posted by Michael Higby at 10:13 PM 2 comments: 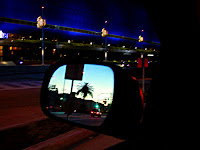 Over at my main blog, for the last couple of weeks, I've considered whether or not I should leave Los Angeles. I was quite touched to see some other blogs picked up on the story here and here and here.

I recently visited where my family is historically from, Iowa and where my parents were born and raised. It had been some time since I had been to the Hawkeye state and my first time as an adult. The pace of life, the difference between a major city like Los Angeles and a small city such as Waterloo in Iowa and the attractiveness of being close to many family members was a magnet to me.

We've looked at a lot of reasons to leave including cost of living, arts and culture and even the blogosphere in Iowa.

And of course LA quite frankly sucks in many ways.

Indeed, there are reasons not to move to a small, Midwestern city like Waterloo, the lack of wonderful things like sushi and the frigid winters among them.

So I am staying.

But its not a dearth or raw fish or a fear of snow that has me keeping put. Its a lot more than that.

To uproot myself, even to an area where there is more family than here in Los Angeles would indeed be a bit traumatic. It would require a lot of work and upfront expense. And there is no guarantee life would be better in the new location.

More importantly I more or less like where I live. The rest of LA may suck but my hometown of NoHo and the spot I moved to a year ago is kind of cool.

Missing out on HOWS Market alone would be something I would have trouble adjusting to.

Ultimately, there is still a lot to do here and if I can contribute in some way, well, I have not generally been someone who's a quitter. I've felt that LA's best days may be behind it but its worth a shot.

My immediate family is all here in the Valley, I have some wonderful friends here, an excellent day gig and lots of opportunity for fun, expression and socializing. And of course this damn old blog which just keeps growing every day.

So much to the displeasure of many of you, you're stuck with me.
Posted by Michael Higby at 12:37 AM No comments:

The proposed development - which Curbed LA calls "insanley huge"- would nearly two million square feet of commercial, retail and residential space. Most of the land involved is owned by the MTA.

However a number of local leaders are expressing concern that officials from the Metropolitan Transportation Authority - as well as local elected officials including area Councilman Tom LaBonge - discussed the project with little or no public input.

Community activist Ron Bitzer who lives northwest of the proposed project told the Los Angeles Times he would have preferred to see "a little more discussion" with the community about the project. Another activist privately told the Sister City that previous city administrations would have engaged in more "transparency" in a decision like this.
Posted by Michael Higby at 12:30 AM 1 comment: